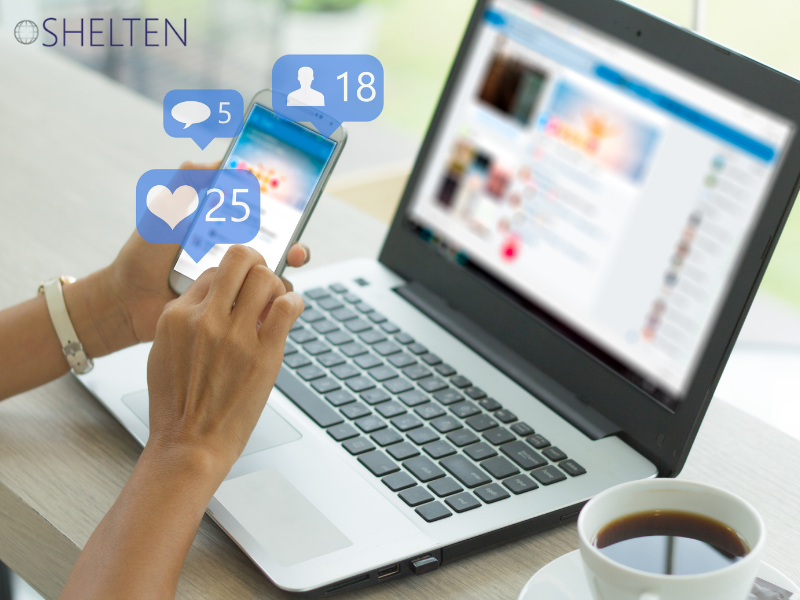 Whether you’re scrolling through your Facebook feed or checking out funny Instagram captions, these quips are sure to make you chuckle. So go ahead and scroll down our list of social media quotes to enjoy some laughs – and maybe even share them with your good friends!

1. “When you’ve got 5 minutes to fill, Twitter is a great way to fill 35 minutes.” – Matt Cutts, former head of Google’s Webspam team

3. “There are things that people say that hurt my feelings or whatever, especially with social media right now. It can be the most amazing thing, and it can also be the most negative and detrimental thing.” – Zendaya, American Actress

4. “What is interesting is the power and the impact of social media… So we must try to use social media in a good way.” – Malala Yousafzai, Pakistani Activist

5. “Everyone is comparing lives on social media and wants the perfect body, perfect image, perfect outfit, perfect life – we’re striving for this perfection, and it’s so unhealthy because there’s no such thing as perfection.” – Emily Atack, English Actress

6. “Our head of social media is the customer.” ― McDonald’s

7. “On Twitter, we get excited if someone follows us. In real life, we get really scared and run away.” – Unknown

9. “99.5 percent of the people that walk around and say they are a social media expert or guru are clowns. We are going to live through a devastating social media bubble.” – Gary Vaynerchuk

10. “We’re living at a time when attention is the new currency: With hundreds of TV channels, billions of Web sites, podcasts, radio shows, music downloads, and social networking, our attention is more fragmented than ever before.” – Pete Cashmore, Mashable Founder

11. “Everyone’s like sheep on social media; like, one person starts making noise, and everyone’s like, ‘Hey, yeah!’ and then you got a whole bunch of people making noise at you.” – Earl Sweatshirt, American Rapper

12. “Independent content these days can be more successful than previously because of the power of social media. However, there are still systems in place to make sure independent artists don’t get as far as signed ones.” – Lilly Singh, Canadian Comedian

13. “I think there should be regulations on social media to the degree that it negatively affects the public good.” – Elon Musk, Tesla Motors CEO

14. “There’s so much negativity on social media, I don’t want to add to that.” – Shawn Mendes

15. “The qualities that make Twitter seem insane and half-baked are what makes it so powerful.” – Jonathan Zittrain, Harvard Law Professor

16. “You can buy attention (advertising). You can beg for attention from the media (PR). You can bug people one at a time to get attention (sales). Or you can earn attention by creating something interesting and valuable and then publishing it online for free.” – David Meerman Scott, American Strategist

17. “I am a huge advocate for anti-bullying in our youth. What I have seen with the rise of social media is that children are not facing bullying on a playground, they are facing it on their cell phones.” – Whitney Wolfe Herd, American Entrepreneur

18. “In general, we’re a social network. I prefer that because I think it is focused on the people part of it – as opposed to some people call it social media, which I think focuses more on the content.” – Mark Zuckerberg, Facebook CEO

19. “Things that help others is what gets the most shares.” – Chris Brogan, American Author

20. “The first rule of social media is that everything changes all the time. What won’t change is the community’s desire to network.” – Kami Huyse

21. What happens in Vegas stays in Vegas; what happens on Twitter stay on Google forever! – Jure Klepic

22. The best way to engage honestly with the marketplace via Twitter is to never use the words “engage,” “honestly,” or “marketplace.” – Jeffrey Zeldman

23. Twitter is a great place to tell the world what you’re thinking before you’ve had a chance to think about it. – Chris Pirillo

24. A lot of people say that social media is making us all dumber, but I not think that. – Unknown

25. Twitter provides us with a wonderful platform to discuss/confront societal problems. We trend Justin Bieber instead. – Lauren Leto

27. Facebook asks me what’s on my mind. Twitter asks me what’s going on. LinkedIn wants me to reconnect with my colleagues. And YouTube tells me what to watch. Social Media is no reality show or Big Brother. It’s but a smothering mother!’  ― Ana Claudia Antunes

28. “If you are on social media, and you are not learning, not laughing, not being inspired or not networking, then you are using it wrong.’ ― Germany Kent”

29. Build it, and they will come’ only works in the movies. Social Media is a ‘build it, nurture it, engage them, and they may come and stay.’ – Seth Godin

30. When your boss starts to connect with all your LinkedIn friends, just know you are spending eternity with that company. – Unknown

Social media platforms are a great way to stay connected with friends and family, but they can also be a great place to find some of the best quotes. These sassy quotes might be funny, but they are also hard-hitting—making them perfect for social media captions.

The saying “laughter is the best medicine” is true, and having a laugh is a great way to end a stressful day or even start a new day right.

Which of these funny social media quotes is your favorite? Let us know in the comments!

We use cookies on our website to give you the most relevant experience by remembering your preferences and repeat visits. By clicking “Accept”, you consent to the use of ALL the cookies.
ACCEPT CLOSE
Manage consent

This website uses cookies to improve your experience while you navigate through the website. Out of these, the cookies that are categorized as necessary are stored on your browser as they are essential for the working of basic functionalities of the website. We also use third-party cookies that help us analyze and understand how you use this website. These cookies will be stored in your browser only with your consent. You also have the option to opt-out of these cookies. But opting out of some of these cookies may affect your browsing experience.
Necessary Always Enabled
Necessary cookies are absolutely essential for the website to function properly. These cookies ensure basic functionalities and security features of the website, anonymously.
Functional
Functional cookies help to perform certain functionalities like sharing the content of the website on social media platforms, collect feedbacks, and other third-party features.
Performance
Performance cookies are used to understand and analyze the key performance indexes of the website which helps in delivering a better user experience for the visitors.
Analytics
Analytical cookies are used to understand how visitors interact with the website. These cookies help provide information on metrics the number of visitors, bounce rate, traffic source, etc.
Advertisement
Advertisement cookies are used to provide visitors with relevant ads and marketing campaigns. These cookies track visitors across websites and collect information to provide customized ads.
Others
Other uncategorized cookies are those that are being analyzed and have not been classified into a category as yet.
SAVE & ACCEPT